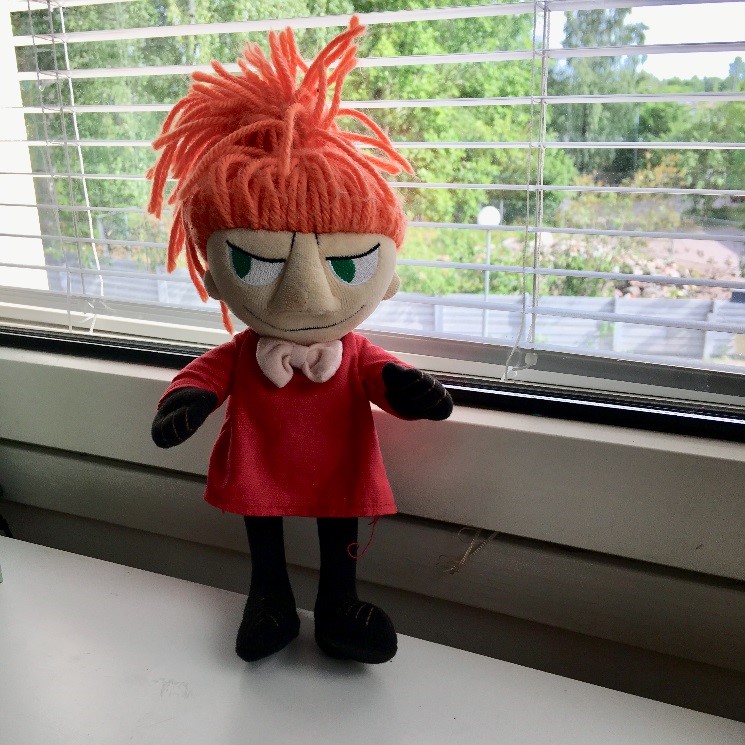 In their previous blog post, Pia Staff ja Mia Julin-Lumio from Day care Ågeli explained how Moomin Language School is used in their daycare in general. This time they delve more deeply into how they organize the playful lessons that are part of the service.

We always begin a playful lesson the same way: the children sit down in a large circle and our Little My doll introduces herself by saying: “My name is Lilla My.” After this, the doll goes from child to child, helping each child introduce themselves in English. Then the teacher welcomes everyone to the playful lesson and sprays the children with an imaginary ‘language shower’, since in Finnish and Swedish ‘language immersion’ is called a ‘language bath’.  The playful lesson continues with activities centered around the day’s theme, and we make sure to both learn something new and revise what we’ve already learned.

Little My begins the playful lesson by saying: ”My name is Lilla My”.

Songs, drums and the English language

For example, when we were learning various action words, the children played a game where one of the children was first chosen as the game leader. The leader picked a picture card depicting one of the action words, such as “walk” or “jump”, and showed it to the rest of the group. The others’ task was to say the word in English and then start moving around the classroom in that specific manner. Then someone else would get to be the game leader. Next, we took out a drum. The children still took turns picking a picture card, but this time they showed it only to the teacher, who then started to play the drum to depict the action. The children used the rhythm to guess the word, and if they got it right, they could then start moving around the classroom in the depicted manner. In the last stage, the children both chose the card and played the drum. Then the teacher could also participate and try to guess the action with the children.

The Moomin Language School material includes songs as well which the children have loved, and we have sung them many times throughout the spring. The children wanted to perform all the songs they had learned at the daycare’s spring show. Everyone’s favorite rhyme ”Banana Split” was recited to the beat of seven drums.

One of the playful lessons included a story about a girl who dreams that all the furniture in her home disappears. We told the story to the children first in English. Then we translated it into Swedish, and then told it again in English. Before the playful lesson, we had prepared a big piece of craft paper on which we had drawn the girl’s house and rooms without the furniture. The children were divided into small groups and each group was given a room to furnish with their drawings. When everyone was done, we went through the rooms and repeated the vocabulary in both English and Swedish. We then hung the house on the wall to help children revise what they had learned every time they saw it.

Picture of the house that the children furnished.

Simon says, animal yoga and other physical games that combine practicing new concepts, movement and agency over one’s own actions have proven to be a great tool for the playful lessons. Similarly, drama activities such as the shopping game have been a lovely addition on the path to learning English. Children have eagerly gathered various toys that they could use in the game.

Animal yoga has been a good way to learn the names of different animals, as well as for us teachers to clearly see the levels on which children are with their motor skills. Because the vocabulary meant for the playful lesson wasn’t completely the same as the different asanas named after animals, we had a chance to both come up with new moves for the animal names and learn the names of animals that weren’t introduced in the playful lesson material. Then we would do the exercises. For example, the children would first form the giraffe asana as well as they could. When the asana was finished, we would repeat the word ‘giraffe’ in English. After the cat asana, we made cat-like noises and then discussed whether English cats meow differently than Finnish cats.

Above are just some examples of how we have used the playful lessons at our daycare. Hopefully you found our experiences interesting and useful!