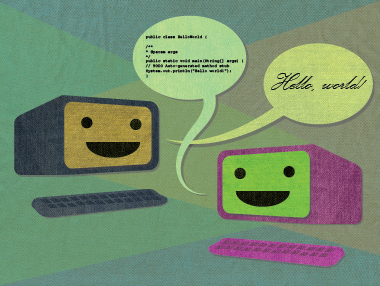 Last October, Apple CEO Tim Cook stated in an interview with Konbini that if he were a 10-year-old French student, it would be more important for him to learn coding than English. He explained that through coding, one can express themselves to 7 billion people worldwide – a point which he also reiterated this January during his visit to Canada. The media reported widely on his statement (see for example the Sydney Morning Herald or India Times). Many agreed with Cook, citing the growth of the tech industry and the amount of high-paying jobs that require some form of programming skill. However, others took Cook's words with a grain of salt.

English is needed in a global community

It is relatively easy for Cook to put forth such an opinion, seeing as he is a native speaker of English. In this regard, he was born with a proverbial silver spoon in his mouth: he has not had the need to learn another (spoken) language, as English is by far the most widely used language when it comes to business, tech, and academia. The situation is somewhat different for those of us whose mother tongue is a language other than English. Today, English is not learned to communicate only with native speakers; it is increasingly used as a mediator language between non-native speakers who do not share a mother tongue. In this way, not learning English not only restricts one’s interaction with the English-speaking world, but with the majority of the world in general. The situation is even more dire if one’s mother tongue is a rare one, and if one is monolingual.

Another point Cook seems to forget is that most programming languages are based on English. Therefore, not knowing English severely restricts one’s ability to learn a programming language, at least to a point where it would be of use. It is not impossible, of course, just more difficult. On the other hand, learning to code (once you have a grasp of English, mind you) might be faster than learning a foreign language, as a Florida state senator suggested. But what needs to be kept in mind is that when one is learning a foreign language, one is also learning a culture and, effectively, a new way of thinking. In other words, learning a foreign language opens up your mind and makes you more aware and acceptive of diversity. There is so much intricate and subconscious detail that goes into the learning of, and the subsequent communication in, a foreign language that goes beyond the command-and-execution format of programming. I’m not saying that learning and using a programming language isn’t a sophisticated process; it is, after all, a language. But more often than not, communication between a human and a computer leaves out the cultural hues inherent in human-to-human interaction.

One of the statements made in agreement with Cook has been that coding skills can lead to better-paying jobs. So can foreign language skills: a report found that the demand for bilingual employees tripled between 2010 and 2015 in the States alone, and language skills were sought after across professions. Additionally, it was said that knowing a second language could lead to a 10-15% increase in pay, while generally making an applicant more attractive to employers. And this is in addition to all the other benefits of language learning, many of which we have discussed previously in our blog.

At the end of the day, the point is not whether one should learn English or coding. Both are important and useful skills in today’s world. But if you are wracking your brain in an effort to solve the English-or-coding question, we have a suggestion for you: begin your child’s English learning now. Children are incredible at learning languages when they are shown how meaningful it can be to their everyday lives. That way, once your child becomes that 10-year-old French (or Finnish, or Chinese) student, you do not need to decide between English and coding. Your child will already know English.