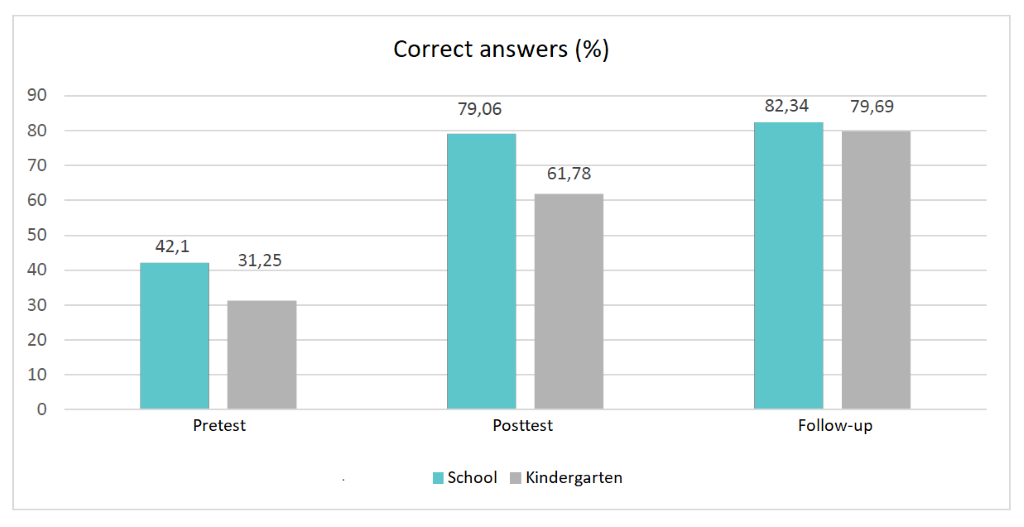 The effect of Moomin Language School on children’s English skills was studied in Tampere, Finland, during the academic year of 2018-2019. The study was part of the 6Aika – The Smart Learning Environments for the Future project1.

Two groups of children – one consisting of preschoolers and the other of first graders – took part in a digital vocabulary test first in November 2018 and then in January 2019 after a period of learning with Moomin Language School. A follow-up test was conducted in May 2019 to see how well children had retained the learned vocabulary and to gauge their motivation for learning English with Moomin Language School. In May 2019, children also took part in a communicative test with two researchers.

The English skills improved for all children who took part in the study. Moreover, children remembered the learned material still in the follow-up test. The increase in the children’s vocabulary knowledge was statistically significant, meaning that the results are likely to apply to Moomin Language School’s learning results in general and not only to the children who participated in the study.

The researchers were positively surprised that the children were willing and able to communicate in English despite previous studies having showed that there’s often little to no speech production in the foreign language after a similar period of early foreign language learning. After all, most children go through a silent period at the beginning of their language learning journey.

The foreign language skills of young children are often difficult to test because most language tests require reading and writing skills. This quasi-experimental study was one of the few that are not based on text.

The digital test consisted of 32 words shown as pictures with accompanying voice recording. The tested words were chosen from the material that the children would cover by the January 2019 posttest. In the communicative test, children interacted individually with two researchers, one of whom only spoke English. In the test, children needed to understand the learned vocabulary in sentences rather than as individual words, follow instructions given in English and answer the English-speaking researcher’s questions verbally or non-verbally.

Search from this page: